We have begun to assess Greenwreath's overall condition, and so far there aren't any major surprises.  The one thing that you always hope to avoid finding in a house made of wood, the termite, has of course made its presence much known in ours.  We are lucky in that our termite infestation, and the resulting damage, is only found in the ‘newer’ part of the house – the main living room added in 1810.  The termites have not affected the older timbers, which are still solid as stone.  We have had Jason Ecker, a local contractor much beloved and trusted among the plantation-owning crowd around Greenville, to come over and take a look at just what we are facing.  Here is what he found: 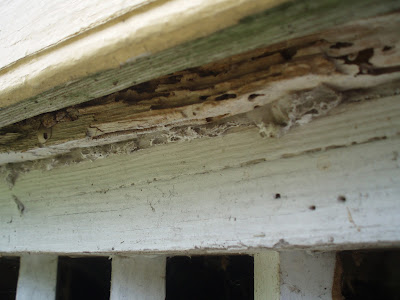 That is the visible portion of the main sill that basically supports the front wall of the house on the left side.  It looks a bit like swiss cheese.  The joists in the living room are in much the same condition.  We are planning to remove the lower half of the front porch, raise the house off the sill, and replace it, as well as sister the weakened joists in the living room floor.  That’s pretty much the extent of the structural damage in the house.  Pretty impressive considering its age! 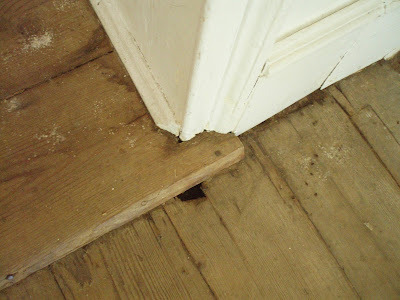 As far as the interior goes, we are basically focusing on just giving the whole house a good deep cleaning.  Since Greenwreath has stood empty for about 2 years, every room is full of spiders, and 2 years’ worth of spiders in quite enough thankyouverymuch.  I hate killing things, so I just remove the webs and allow them to scramble away, although they seem to just relocate to another room.  I’ll have to rethink my strategy.  Also, scrubbing 2 years’ worth of spider droppings (white spots in upper left corner of this photo) off of 230-year-old heart pine floors is enough to make anyone want to cry.

Here are just a few pictures of what the house looks like now.  Check back and see what progress we are making!


Posted by Garreth and Kim at 7:16 AM No comments:

A Little Bit of a History Lesson

Greenwreath was built by John Foreman in 1780 after moving from Virginia to Pitt County in North Carolina.  By the time he died in 1818, the Foremans owned 6,000 acres along the Tar River.  By 1830, John’s son Ivey had further expanded the family’s holdings to more than 10,000 acres, making the Foremans one of the county’s most prosperous families prior to the Civil War.  John L. Foreman, the third generation planter, served 3 terms in the House of Commons before being elected to the state Senate in 1844.  His term went unfilled due to his untimely death, and the plantation passed to his son, William Joseph Foreman.  William served as an officer in the Confederate Army, and his younger brother Ivey became the youngest gunboat commander in the Confederate Navy.  Quite the family legacy surrounding one house!

The house stayed in the Foreman family until 1919.  There are many more adventures to share about Greenwreath’s history, but we’ll pick up on that in a later blog…

An Antebellum Beauty
The present-day kitchen and den form the oldest part of the house – the original hall-and-parlor structure which is believed to have been one-and-half stories with a gambrel roof.  The section which is now the dining room was added in 1791, making the house into an L shape but retaining the original gambrel roof structure.  The formal living room and two large upstairs bedrooms were added in 1810, the roof was altered to accommodate both the new structure and the original house behind, giving Greenwreath its current appearance and floor plan, with a wide center hall only seen a few homes in this area belonging to the planters with larger holdings, and thus more income.

There are small details throughout the house which hint at the wealth the Foremans must have enjoyed and the talented craftsmen they were able to hire.  Our favorite features must be the finely carved Federal era mantel with beautifully finished sunbursts and dentil molding, and the chair rail hand gouged with swag, tassel, and rosette motif (the only known example in Pitt County), both in the front living room.  An additional feature, which we initially overlooked as old crumbling paint that needed sanding down, is the marbleized stair risers.  It wasn’t obvious at first, but the wooden risers were hand painted to give them a marble effect, which was apparently all the rage in 19th-century North Carolina!

Moving into the 21st Century
Because Greenwreath is an architectural gem and has enjoyed such an important role both historically and economically for Pitt County, we fully appreciate the need to preserve the house’s original features as much as possible.  When we bought Greenwreath, we knew the house would need a bit of work, and we knew we would always have to plan ahead for repairs and renovations that inevitably arise from owning an old house, but I don’t think we quite knew what we were becoming a part of.  Even though we own it (which still hasn’t sunken in yet), it feels like we are just the current occupiers, the Keepers of Greenwreath, here to make sure the house is loved and cared for until the next generation.  I hope we can live up to the ones who came before us.
Posted by Garreth and Kim at 7:54 PM No comments:

Neither of us thought we would ever feel the need to write a blog.  That changed on Thursday, July 18th 2013 when we officially became the proud owners of Greenwreath, a historic plantation house located between Greenville and Falkland in eastern North Carolina.  As a building listed on both the North Carolina Registry and the National Registry for Historic Places, it was clear to us that our renovations needed to be faithful to the house’s time period, as well as thoroughly documented in order to keep the public abreast of what we are doing to one of the local architectural treasures. 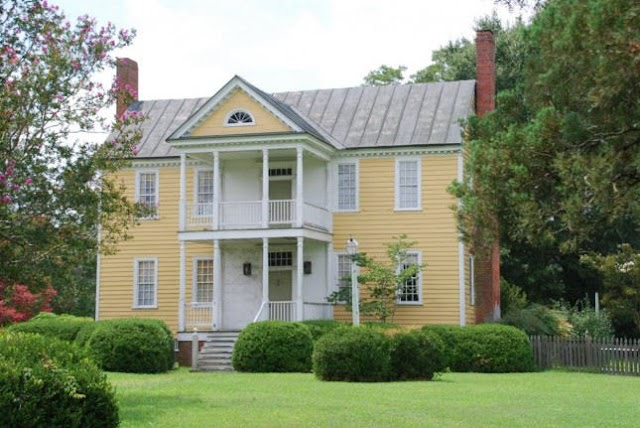 What follows is an account of our experiences and adventures and the ongoing renovations of this amazing place - or "that big old yellow house" as we quickly found out how people in the area know it.  We will try to post our updates in a timely manner!
Posted by Garreth and Kim at 7:27 PM 1 comment: