Our little dairy building was in a sad state when we moved in 6 years ago. This summer, however, saw some big changes. As we showed you previously, the roof had many holes in it, and the flooring was failing. Jason, once again, went to work and rescued it just in the nick of time. 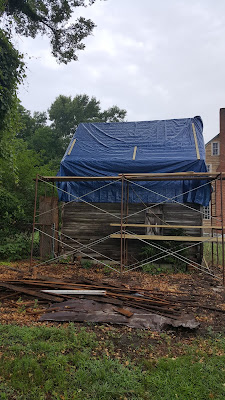 He got to work on the roof, removing all of the old metal and shingles. Of course, it immediately started raining. We did learn a few things about the building's history in dismantling it. The siding is not original, although it is probably late 1800s or so, and the space in the attic was likely a sleeping loft with a hatch and a ladder for access. There was also evidence that a window allowed light into the loft once upon a time, but the opening is now hidden by the slightly newer siding.

The roof framing beneath all of those rotting shingles was actually in really good shape, and the original pegs holding it all together are still doing their job after about 250 years. We think this building is the oldest "original" building on the property, dating back to the origins of the house sometime between 1746 and 1780. While the house has seen a lot of modification throughout the Foremans' tenure here, the dairy is still much as it was when it was built. 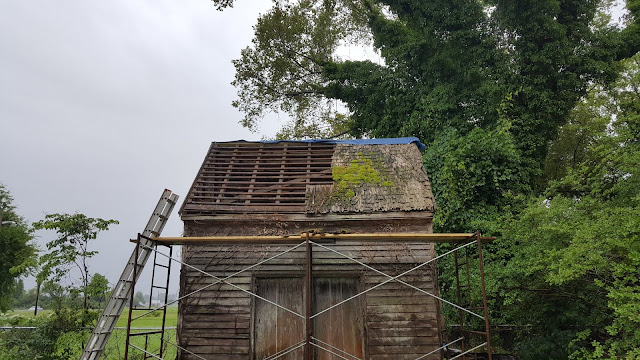 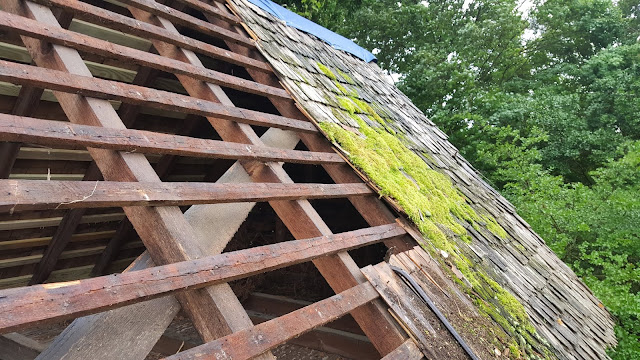 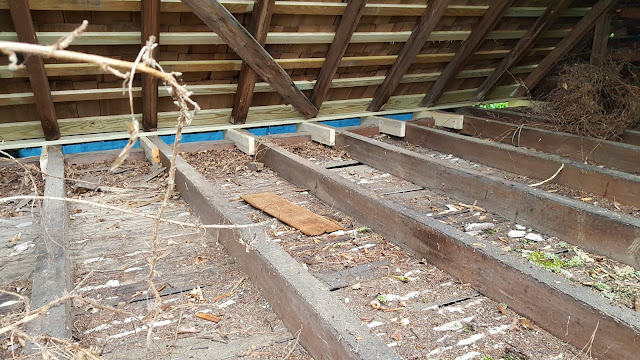 Once the roof was resolidified, Jason turned his attention to the interior. The joists all needed to be replaced, as did the front sill. Luckily, much of the flooring could be salvaged, although there was a huge hole over which someone in the past had nailed a piece of plywood. Naturally, Jason had some spare flooring he could use to repair the hole. With a new sill and flooring in place, the dairy is sturdy and will remain upright! 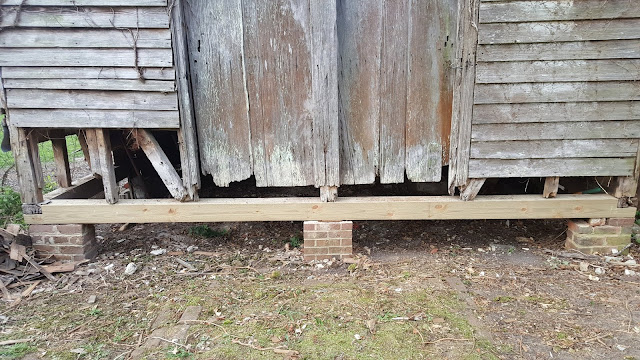 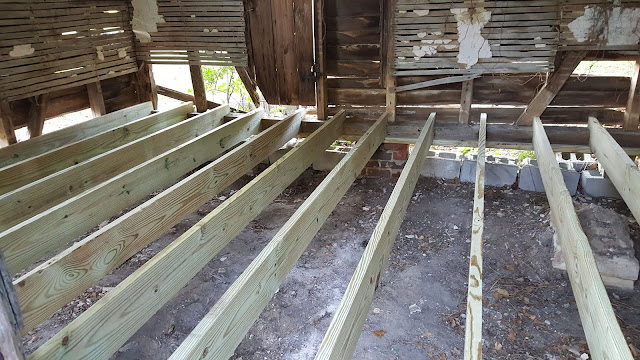 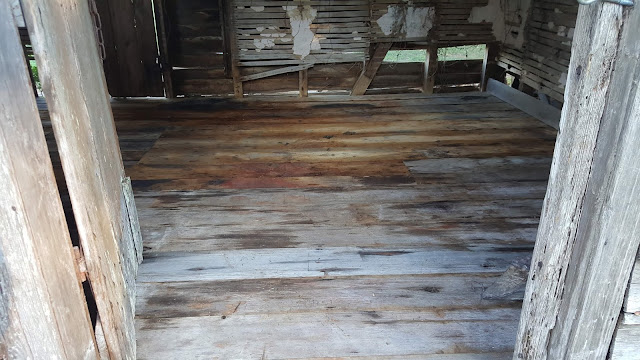 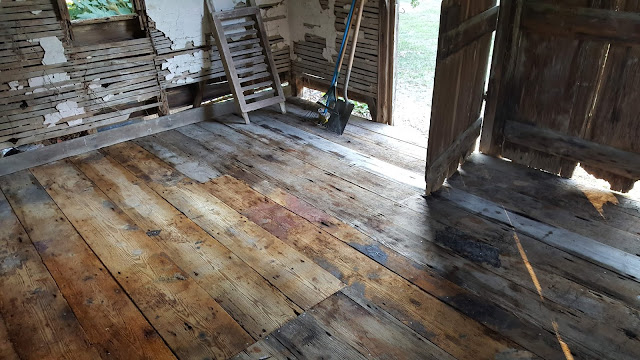 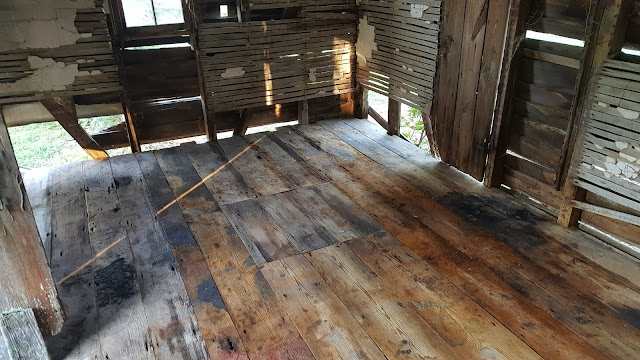 And, finally, the big reveal!

We decided to go with cedar shakes on this building, since wood would have been used originally, and with a smaller building, it is less to maintain. Jason also formed what is called a projecting comb ridge at the apex, a traditional feature that is also apparently a lost art. This type of ridge, used long before metal flashing became the norm, helps deflect water away and protects the exposed ends of the wood shakes at the ridgeline. Basically, the north side of the roof stands taller than the south side: picture a huge comb-over made of wood. 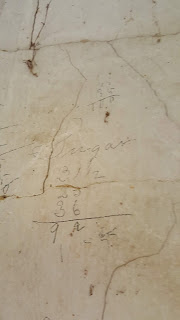 This summer marked the first time in 6 years that we were able to safely enter the dairy and walk around in it. It felt like such a huge step forward, since it had been neglected for so long. At least the main house was always habitable, not so for the dairy. Once we strolled around inside, we noticed some old writing on the crumbling plaster walls. While the cursive handwriting is challenging to read in places, some of it appears to be grocery lists and tallied costs. Perhaps someone quickly tallying and tracking the farm's expenses for the week?

The next step in the dairy's renovation is to replace the siding with beaded age-appropriate siding to match the house, repair the interior walls (we still need to decide on plaster vs. drywall), and of course paint. But, all of that is for another day.


Posted by Garreth and Kim at 1:04 PM No comments:

Not only are we restoring our home, but the property also has three outbuildings which need attention too. The oldest of the three is the dairy building. We believe that it dates back to the mid-eighteenth century or so and was built around the same time as the original house (our current den and kitchen). It is the oldest "original" structure anyway, having had relatively few modifications over time. The roof is a mishmash of cedar shingles in the front and early 20th century metal in the back, with daylight streaming through in several places. When we moved in, it was in pretty rough shape and was severely overgrown. It certainly wasn't safe to enter, since the flooring and joists were all rotten and failing. 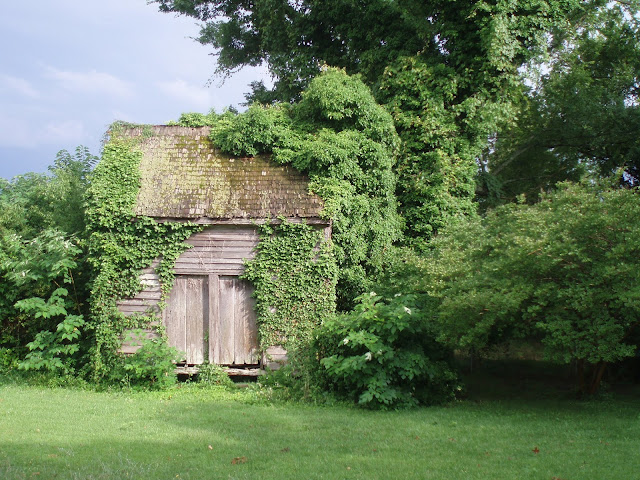 We began the hard work of clearing the overgrowth to see what we had to work with. It seems that many of the vines clinging to it had become integral to the structure. 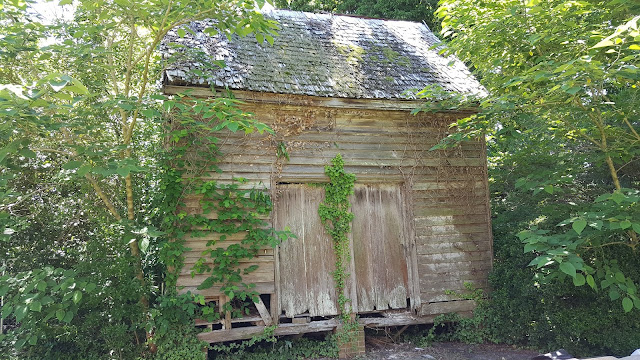 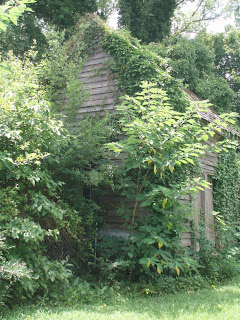 While people generally recognize the need to rescue homes, many small outbuildings that were so important to the running of farms and plantations are sadly neglected. It's rarer to find intact examples of dairies, smokehouses, corn cribs, and even slave quarters, simply because these types of buildings were incidental to the main house. Their primary purpose may have disappeared long ago, along with the way of life that sustained the need for them in the first place. This type of architecture is just as important in hoping to understand historical land usage and rural economies as the larger plantation homes which are more abundant (but also sadly disappearing with each passing year).

Since our property is on the National Register of Historic Places, we have a responsibility to rehabilitate and maintain all of the buildings on our land and not just our house.

So we got our hands dirty! 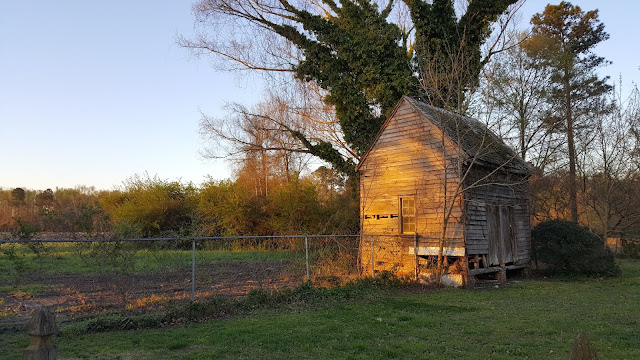 First things first: we had to clean up all of the vines and bushes. Much of it we could do ourselves, but we thankfully have a friend with a digger and some free time. He came over and spent a few hours digging up all of the weed trees that had sprung up around the building over the last few decades. It's amazing what a little hard work can do! Once we got all of that stuff out of the way, we could take a look at the interior. 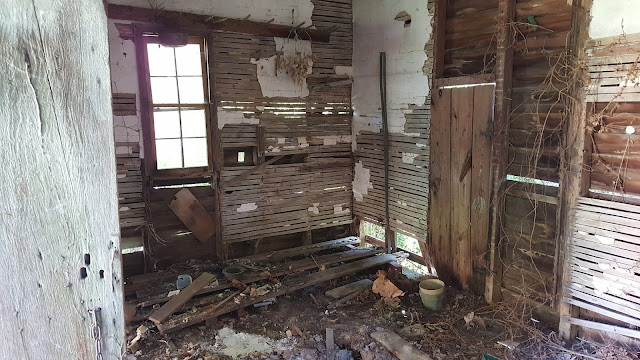 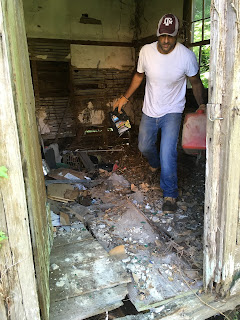 It was a mess, to say the least. It looked like generations of people had piled up a bunch of stuff in there and shut the door. Thanks to an extremely holey roof, rain had gotten in and saturated all of the debris, the floor and the joists, so we had to be extremely careful about where we tried to step. The flooring had completely collapsed in one section, and the joists were lying in the dirt below the building. We swept it all out and found some pretty cool stuff, including the bone-handle fork and an early cut-glass serving plate that miraculously didn't have a scratch on it and now has a home in our kitchen. Once it was cleared, Garreth worked on removing the flooring, so that it could be dried out and salvaged. 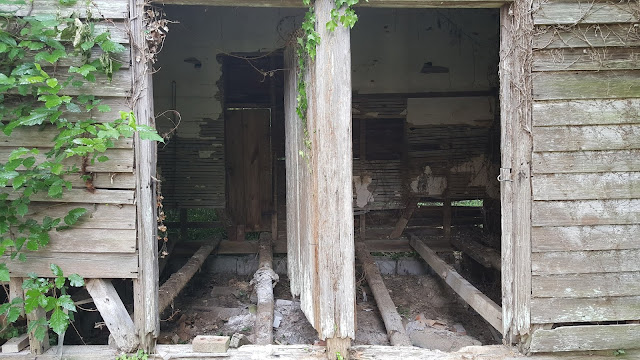 We found that the floor joists are nothing more than roughly-hewn half logs, and that many of the timbers still bear the original carpenter's marks. Unfortunately, the joists were in too rough a condition to be structural, but we saved them, perhaps for a decorative use down the road.

At least the flooring itself was largely still usable, so we stored it in the biggest outbuilding so that it could have plenty of time to dry before reinstalling it in the future. 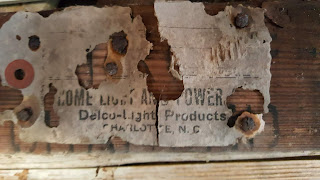 Finally, we found an interesting little detail under the floor and on one of the walls. Under the floor is a mysterious concrete pad, which Garreth naturally thought was a capped well that is definitely haunted. However, we found a paper label in the wall from Delco power. It seems that coupled with the remnants of knob-and-tube wiring we find in the main house, these are both indicators that there was a generator in this building and that Greenwreath had electricity fairly early in the 20th century. In digging in the crawlspace of the main house, we also found a telephone arrestor, a kind of early surge protector for your phone line. This tells us that by the early 1900s, the Foreman family was still doing well enough to afford such modern amenities.

Stay tuned to find out more about the rehabilitation of the dairy building!

Posted by Garreth and Kim at 10:32 AM No comments:

We now resume the story of our dining room, many months after its demolition! It has been a very busy year here at Greenwreath, and we have gotten behind in our updates yet again! But, we will strive to be more diligent in our posts in the coming weeks, as things settle back into a normal routine. When we left off, we didn't have much of a dining room to speak of, but work continued...

The mantle and most of the scraped wainscot was reinstalled. Unfortunately, some of the wainscot was so termite-damaged that it was nothing more than a paint shell. These sections were replaced with new wood, and Jason was able to replicate the damaged sections of trim to blend in with the original. We took plenty of photos to document exactly what changes we had to make considering the damage we encountered. With all of this in place, you can really see how colorful all of the original woodwork must have been at one point in time. 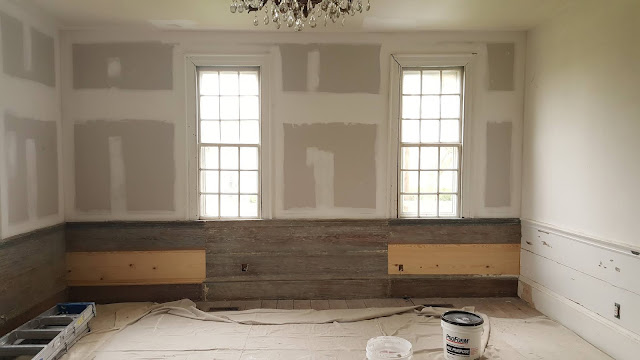 Finally, we hired the very talented Peter Vences to paint the wood trim, giving the room a more completed feel.

Unfortunately, within a month of finishing the paint and new drywall, we had a massive termite swarm and decided to cut holes in the walls in order to treat the wooden timbers. Two steps forward, one step back. But, we did discover that there was indeed a window in the wall by the dining room door pictured above - the sill is even still there. This confirms that this used to be an exterior wall leading out to a porch (which is now our front hall). The story continues!
Posted by Garreth and Kim at 6:36 PM 2 comments: