When we moved in, it seemed that the dining room was the least of our problems. If you recall, it looked something like this...
We primed the walls thinking that the drywall was in good shape and we could paint it when we were ready. As time went by, however, and we were busy dealing with the larger projects, this room got a bit worse. Evidence of termite damage became more and more apparent. There was definitely a reason for the separation in the wainscot after all. One day, I was striding through the little doorway between the dining room and kitchen, when I felt a bit of a crunch. It was time. 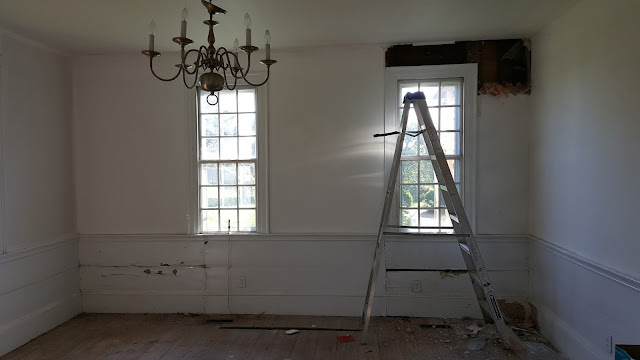 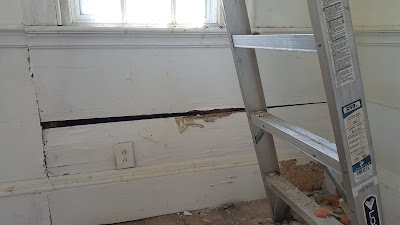 When the walls started to come down, there was more termite damage than we were initially expecting (or hoping for), as well as the huge surprise of a live termite colony in the floor around the hearth. We also found many old repairs and evidence of the room's evolution.

This room has lived through a lot. It was built in the second phase of construction sometime around 1791, not so much as an extension but as a second building erected a measly 6 inches in front of the old house. When the room was finished, it would have made the house into an L-shape with a chimney on the front in addition to the two older stacks on the sides of the original house. A second staircase was also added to the left of the chimney. When the house was extended again in 1827, the front-facing chimney stack was moved to the side to make the new, bigger house more symmetrical, and the staircase was removed. It is amazing that given all of these drastic changes, the room was not completely demolished and rebuilt from scratch. It probably would have been easier, or cheaper. Our builder, Jason, rants about it.


We learned a lot about the house just from this room alone, some of it puzzling, some of it interesting (like the newspaper), all of it part of the journey. Stay tuned to see us tear further into the dining room!